There are few topics on which the arboricultural community is so divided as the effects of Meripilus Giganteus on the structural stability of Beech trees. These divides run not only between the opinions of arborists, but also through the minds of individuals, one of those individuals being me.

The fungus itself is feared and despised for good reason. It mercilessly slays some of our most majestic native trees doing most of its dirty work out of site on the underside of the tree's structural roots. The result is often the sudden failure of very large trees with little or no warning. It's therefore understandable that many arborists quickly prescribe the chainsaw as soon as they see the fungus' insidious frilly bonce poking up between a tree's toes.

I love Beech trees, and therefore hate Meripilus. So, about a decade ago, when new ideas on the prognosis of infected trees started to unfurl, I was keen to learn more. In an overly simplified summery the theory was that if the tree had a healthy crown and good spreading buttress roots the effects on structural integrity were likely limited. I hasten to add there were various caveats but you get the idea. The new theory stated to shift opinion as it percolated down to the roots of the industry, but a sea-change never materialised. It seems, partly at least, that anecdotal evidence to the contrary is hampering the uptake of the theory bringing the nightmares of mighty trees thundering to the ground back into the minds of arborists.

So where are we now? Personally, I'm at just about the same place as I was at the end of the first paragraph. As a reasonably risk averse individual there have been sadly few Beeches I've dared give the benefit of the doubt. Happily, I did find one such tree the other day though.

Having the 'good fortune' to find a Beech with Meripilus, in otherwise good condition, in a not too busy location, in which the owner was willing to invest to retain, was something I couldn't pass up. Luckily, as my budget was still limited, the tree was also small enough to investigate with a manual excavation. Initially things went well with the undersides of the four relevant buttress roots exposed with no evidence of decay. Unfortunately, when I was just about to back-fill, I hit decayed wood at about 0.5m down in the central root system. Well, I guess the fugus had to be dining-out somewhere. Still, as all the buttress roots seemed to be intact, I thought hard, took a deep breath, and reached for the pen rather than the chainsaw. At present the tree's (currently stable) lean is being closely monitored for movement. In addition, just to be sure, and subject to Tree Officer approval, I'll be returning to micro drill the buttress roots. Finally, I'll be revisiting the tree in full leaf to gain a better physiological picture, as well as fully re-assessing it on a regular basis.

...and what of the original question? Does Meripilus + Beech = Fell? Well, to solve that equation, we might have to have the wait for the second coming of Einstein and hope he takes up studies in arboriculture. In the mean time I'll keep you posted on my case study... 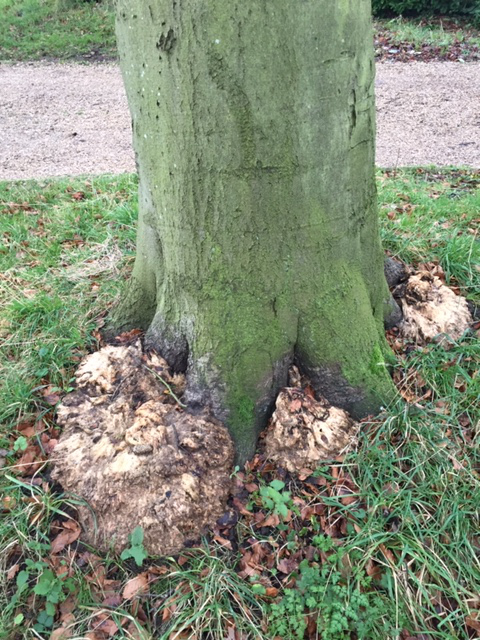 Before and after excavation 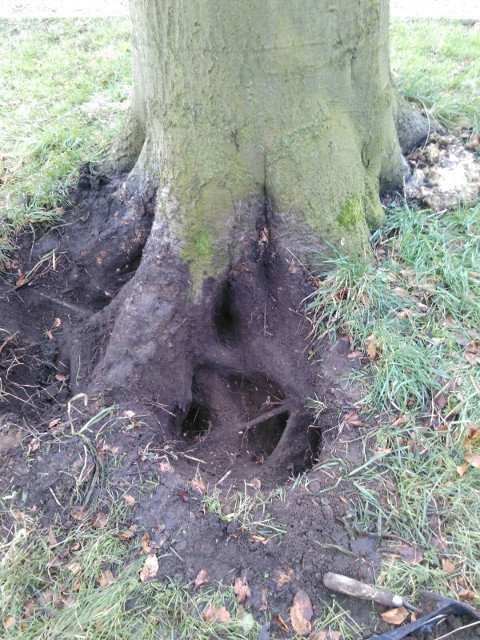 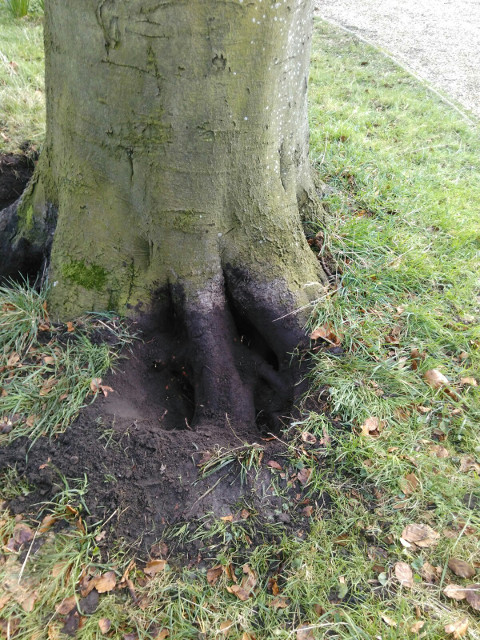